A Visit to the De La Warr Chantry 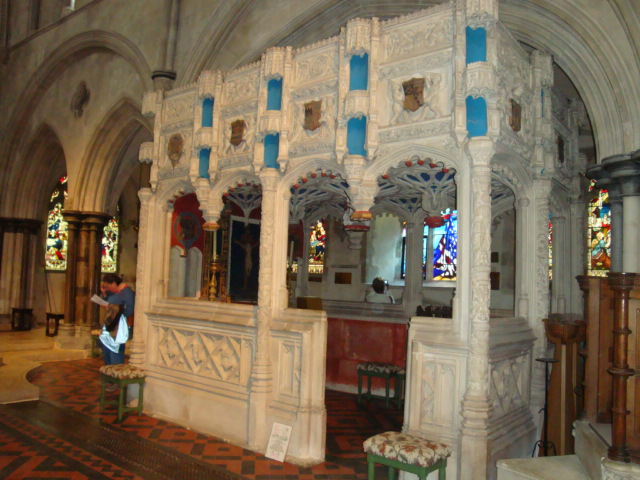 The walk along Park Lane to the ruins of Halnaker House prompted lots of questions in my mind about the people who lived there and why the 3rd Duke of Richmond let the buildings slowly fall to ruins.

Lord de la Warr lived in the house during the 16th century and his beautifully decorated chantry can be seen in Boxgrove Priory. But it was while I was remembering his details, that it slowly dawned on me, I had recently seen the De La Warr coat of arms on the ceiling of the Robert Sherburne room in the Bishop’s Palace. I’ll write about this in my next post as it turns out to be the emblem of the father of the man who had the chantry built! That’s always the problem when families continue to use the same Christian names!

So here is just a little bit of history about the de la Warr family! Thomas West, 8th Baron de la Warr, born c1457, lived at Halnaker but came from Offington near Worthing. He served Henry VII and Henry VIII well and played an important part in the Field of the Cloth of Gold*. So it is his arms that are depicted in the Bishop’s Palace, along with other early 16th century Sussex men, well known for their service to the Crown and Church. The 8th Baron died in early 1525 and is buried in St Mary’s, Worthing.

It was his son, also Thomas West, 9th Baron de la Warr, born c1475, who had the chantry built at Boxgrove Priory in 1532. However, when he died in 1554 he must have decided that he and his wife would like to be laid to rest alongside his parents in St Mary’s, Worthing rather than in Boxgrove Priory.

As you can see, the chantry’s carvings are far superior to the norm at this time. It is a mixture of Gothic style along with Renaissance carvings. During the 20th century the chantry chapel was used as the family pew for the Dukes of Richmond and has been beautifully preserved. If you drop by the Priory you’ll see that it has been brightly repainted in recent times. Well worth a visit if only to see all the beautiful angels!