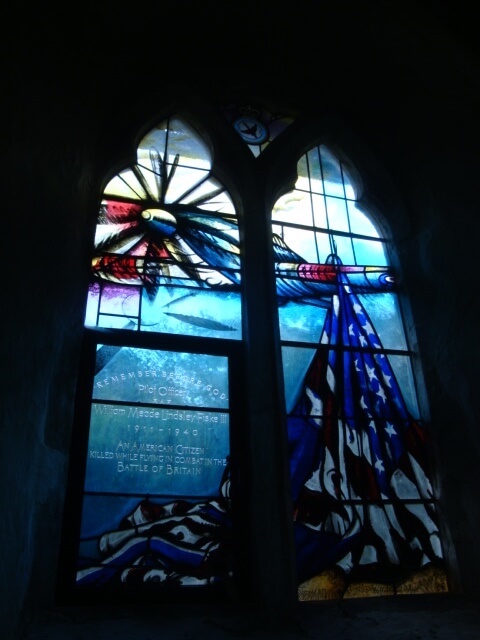 Years ago, as part of my history degree, I worked as a volunteer at Tangmere Aviation Museum. The museum, located just a few miles east of Chichester, is run entirely by vounteers, keen to preserve the important role RAF Tangmere and its satellite airfields played during World War II.

I learnt about so many people who had given their lives in the defence of England. I was reminded of one of them a couple of days ago when I wandered around the ancient graveyard of St Mary and St Blaise Church at Boxgrove. In a quiet corner is the grave of Pilot Officer Billy Fiske.

Billy was a young American, who in 1940 already had the world at his feet. He had attended school in Chicago and France and studied Economics and History at Trinity Hall, Cambridge. In 1928, at the age of just sixteen, he competed in the Winter Olympics in St Moritz as a member of the US Bobsled team. He also competed at Lake Placid in 1932, but when invited to lead the US team for the 1936 Winter Olympics in Garmisch-Partenkirchen, on political grounds, he declined. Fiske’s great interest in skiing, sparked when he was at school in France, led him to Aspen, which by then was in steep decline in the aftermath of the boomtown years of the 1880s. Together with Ted Ryan, they began to put together plans for a ski lodge and with the help of Swiss ski guides, the very first ski lift was opened at the end of 1937.

Before the outbreak of war, Fiske was working as a banker in London, but was recalled to New York. He returned to England aboard the Aquitania in the company of a work colleague who had joined Auxiliary Air Force Squadron No. 601. Fiske’s desire to join up meant that he had to pretend to be a Canadian as the United States was still neutral. After initial flying training, he was admitted into to the Royal Air Force and wrote in his diary, “I believe I can lay claim to being the first US Citizen to join the RAF in England after the outbreak of hostilities.”

On the 12th July 1940, Fiske joined No. 601 Squadron, a Hawker Hurricane unit at RAF Tangmere. On the 16th August 1940 they were scrambled to intercept a squadron of German dive-bombers. After just 15 minutes of flying, a German gunner put a bullet through the Fiske’s fuel tank. Despite being badly injured, he managed to get his aircraft back to Tangmere. He was rushed to the Royal West Sussex Hospital in Chichester, but died two days later of surgical shock.

The inscription on the gravestone of William Meade Lindsley “Billy” Fiske simply reads, “He died for England”. The track through the grass of the graveyard to his resting place is well worn. Many people still come to pay their respects to this young man who gave his all.

In far more recent times a memorial window in the Priory was dedicated to his sacrifice. This window was given by the  601 Squadron Old Comrade’s Association. It was designed and created by Mel Howse and dedicated in September 2008. 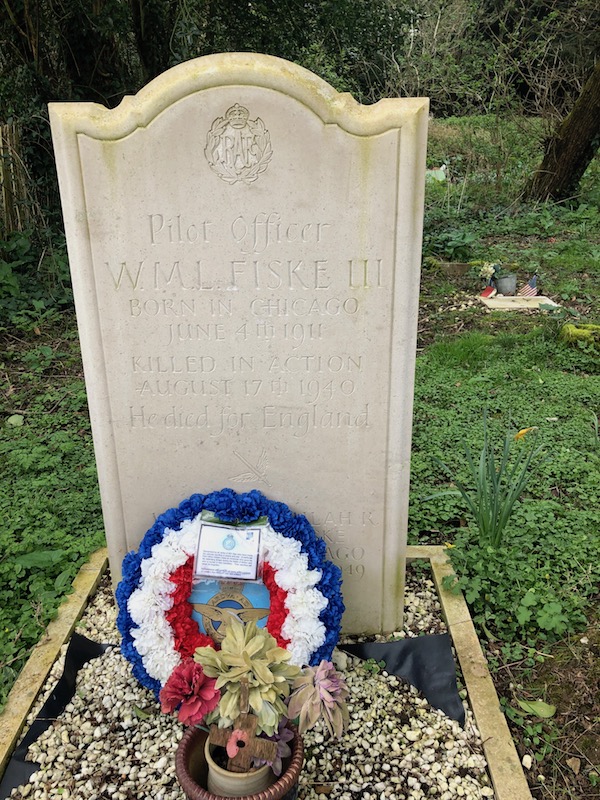