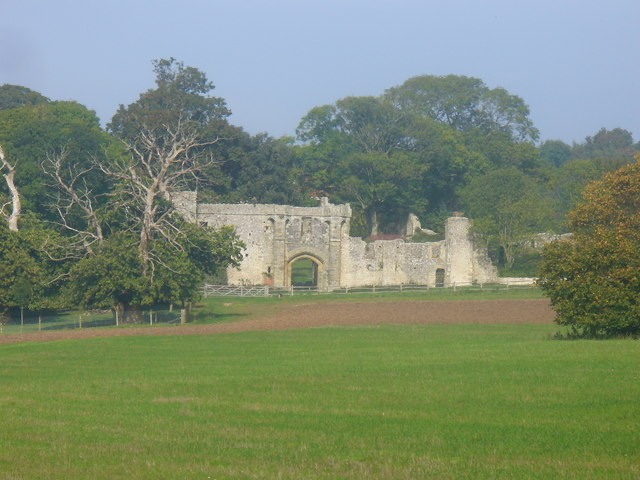 Taking a walk northwards up Park Lane from the tiny village of Halnaker towards the majestic ruins of old Halnaker House last Sunday reminded me that a few years ago I had gone on an official visit, but had never bothered to write up my notes! Now of course I can’t remember anything! So with the new ‘Pevsner’ to hand I am reminding myself of a few of the facts!

This tiny village, four miles north-east of Chichester has such a strange name – it is pronounced Hanacker. It may signify half a strip of cultivated land. In the 17th century it was known as ‘Half Naked’. It is probably more well known for its mid 18th century windmill that stands majestically on the South Downs than the ruins that I was about to visit! It has been immortalised by Hilaire Belloc in his Sussex poem Ha’nacker Mill – for that is how it is pronounced. There is a wonderful walk up to the windmill and on fine days it is possible to see the Isle of Wight and the Spinnaker Tower in Portsmouth.

Halnaker House was an important medieval house begun by the de Haye family, who founded Boxgrove Priory. By descent it passed into the hands of the St John and Poynings families and was substantially upgraded in the 16th century by Thomas West, Lord de la Warr, whose chantry can be seen in Boxgrove Priory. The Halnaker estate was bought by the 3rd Duke of Richmond in 1765 partly because he was becoming more and more irritated with the increasing amount of traffic to London passing by his front door – in other words Goodwood House. So the duke wasn’t really interested in Halnaker House for his family to live in, so it began to be neglected and a late 18th century drawing by S H Grimm shows how it looked before it began to fall apart in 1800. Total ruination was helped along with the wholesale transplanting of interesting features from Halnaker to enhance various buildings throughout Chichester. You can see some of them if you have a wander along Canon Lane in the Cathedral Close.

However it is still easy to see the late 14th century gatehouse and substantial sandstone walls. Behind the ruins is an 18th century Sussex cottage which I always ponder about – would it be nice to live there??? Or a bit too isolated?

In the 1930s the Goodwood Estate sold off a lot of land in order to settle huge death duties levied after the deaths, in very quick succession, of the 7th and 8th Dukes. Parts of the original Halnaker Estate were sold off and up behind the ruins of the old house a new house was built, designed by Edwin Lutyens for Reginald McKenna, Chairman of the Midland Bank. Halnaker Park was one of Lutyens’ last country houses. In contrast to the classical style he used for the design of various banks and municipal buildings, Lutyens recalled his earlier vernacular style heavily influenced by the Arts and Crafts style. The use of whitewashed brick and Sussex tiles helps the house to sit comfortably in the South Downs and it makes a pretty picture.