His Grace’s Coat of Arms 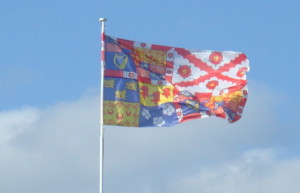 This summer we have all been enjoying the most magnificent flag adorning the entrance to Goodwood House. All our visitors comment on it and I invariably struggle to explain it to them, especially when the wind drops and the detail disappears from view. This has prompted me to really get to grips with the symbolism of the Duke of Richmond’s Coat of Arms. It is something I normally gloss over and hope that I won’t get too many questions about!! So this, I hope is a simple explanation of the Duke of Richmond’s Coat of Arms. Just to clarify, our present Duke is the 10th Duke of Richmond, Lennox and Aubigny and 5th Duke of Gordon. 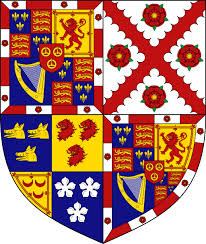 We will first look at the first and fourth quarters which depict the Royal Coat of Arms.  These two quarters are then subdivided into quarters again and here follows an explanation of the details. The first and fourth ‘mini’ quarters show the three lions passant of England, the second shows the lion rampant of Scotland and the third shows the harp of Ireland (now referring to Northern Ireland). Overlaying the ‘mini’ quarters in the centre is an escutcheon depicting the three buckles of the Dukedom of Aubigny. Surrounding both the first and fourth quarter is the red and white border with the red Lennox rose. This may be to clarify the link with illegitimacy. Now on to the second quarter. This is a fairly new addition to the Coat of Arms and makes it all look very pretty. Here we can see the Lennox saltire embedded with the Lennox rose. A saltire is another word for a cross on a flag. Finally the third quarter seems to be the most complicated. Once again this quarter has been subdivided in to yet another shield which depicts the various components of the Clan Gordon. So the first ‘mini’ quarter depicts the three boars heads of Gordon. The second shows three lions heads referring to Badenoch. The third shows the Crescents of Seton and the fourth refers to the three cinquefoils of Fraser. There are also three crests which are sometimes shown to adorn the coat of arms. To the top left, Avant Darnlie, referring to the Stuart lineage, is the Lennox crest. The central crest, En la Rose je Fleuris is the Richmond crest, which also incorporates the Lennox rose. On the top right is Bydand, the war cry of the Gordon Clan meaning standfast.