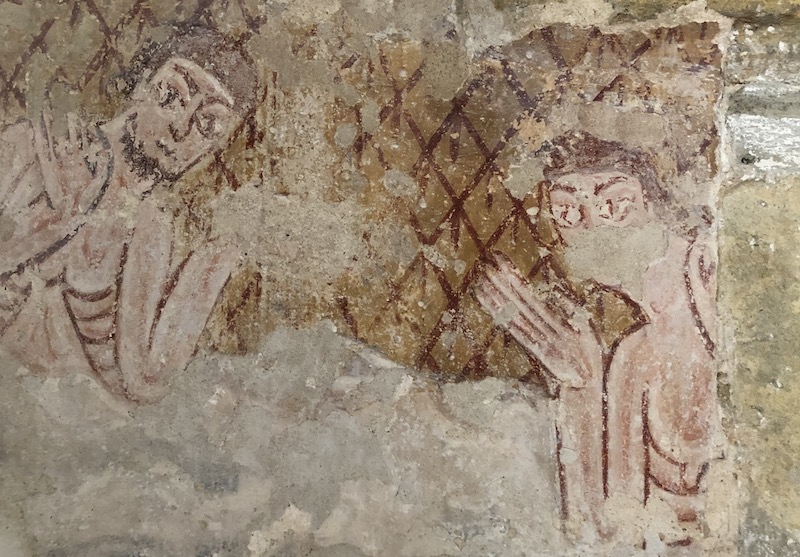 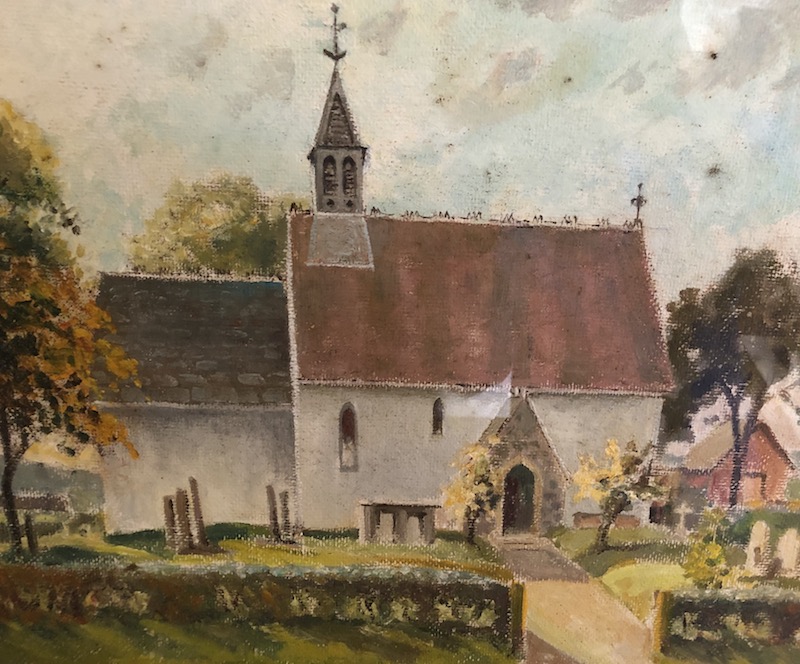 How is it possible that these wall paintings still exist? They are 900 years old! I visited a few months ago when we were semi out of lockdown. How many thousands of us will have looked up to these figures – admired them and taken interest in the stories they portray? A visit to St Botolph’s Church in Hardham near Pulborough is really recommended!

They are amongst the earliest medieval wall paintings to survive in England and date from the very beginning of the 12th century. About forty individual subjects survive, with the only significant losses being where windows were inserted later and the chancel arch where the plaster was stripped off during the 19th century. It is almost certain that all the paintings were the product of a single travelling workshop of artists, known as the Lewes Group as they also created schemes in other churches nearby. Stylistically, they are described as Anglo-Norman as there were still very close links following the Norman Conquest. However, the look of the figures is decidedly Anglo-Saxon – with tall, slender bodies and small heads on long skinny necks! They are often seen to be gesturing excitably with large hands. Their faces are square and seem to have hair piled up on top – a bit like a bobble hat. The backgrounds also follow the then fashion of geometric patterning.

So when was the church first built? Probably during the late 11th century or beginning of the 12th and then the paintings would have been added almost immediately. A 12th century charter shows that the church was originally dedicated the St George and one of the paintings shows him in battle – possibly the 1st Crusade of 1095.

So how were the paintings executed? A base layer of plaster would have been daubed onto the rubble walls and over this thinner layers were added to form a patchwork of ‘canvasses’ and whilst still wet, the paintings would be created. So they are a type of fresco. The colours used were restricted to what pigments could be acquired locally – red and yellow ochre, lime white and carbon black. To create the green halos they would have used the most expensive dyes – a copper carbonate produced probably from malachite.

These paintings would have been covered up with limewash for several centuries. They were discovered in 1866 and have undergone several conservation treatments. The trouble is that in the past these methods have usually done more harm than good.

I won’t go into all the stories here because it is best to see them in the flesh. But here’s a little bit about the photos I took.

The main picture depicts ‘The Temptation’. Here we can see Adam pointing to Eve who accepts the apple from the winged serpent in the tree on the right.

The third picture does not make for easy viewing.. at the top we see the ‘Massacre of the Innocents’. Two soldiers are seen butchering the children, the one on the left holding a naked child aloft by his leg, while its mother kneels before him in supplication. Below we see ‘St George on the Wheel‘ where a naked St George is bound to a huge spoked wheel

There is a great little booklet available in the church that brings all the stories to life! 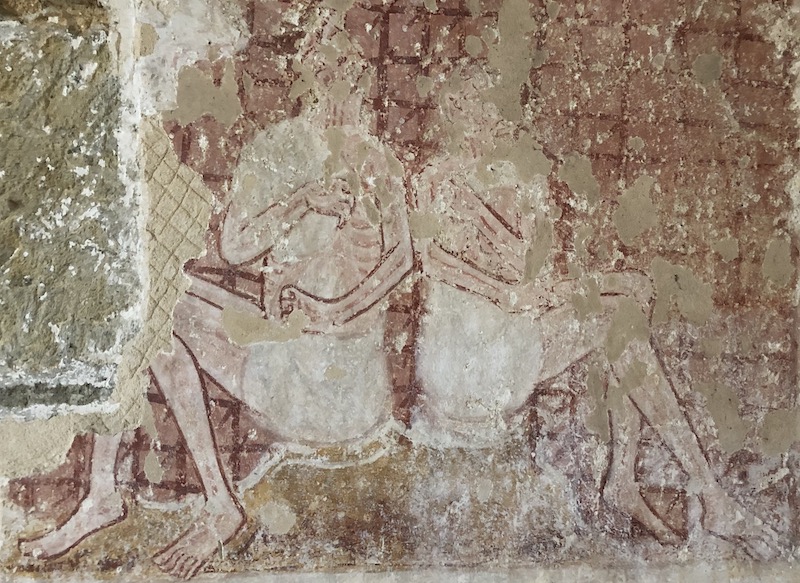