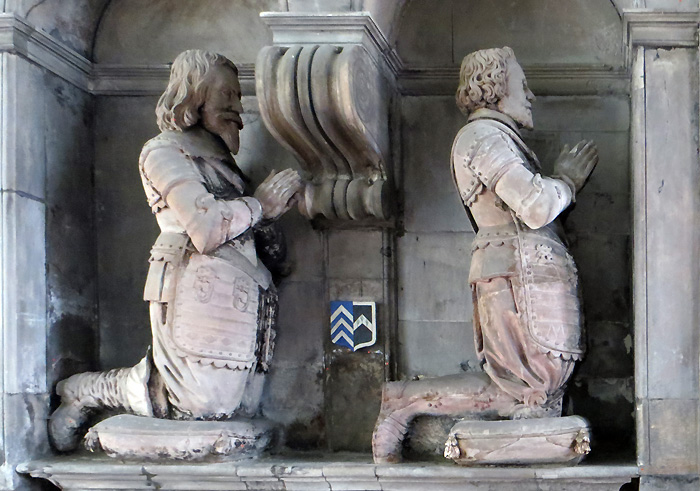 Isn’t this a magnificent memorial! Sadly only the top half remains! You can see it in the church of St Andrew at West Dean. It is a reminder of the Lewknor family who purchased the Manor of West Dean in 1588. They held it until 1706 when, through marriage, it passed to the Peachey family.

In very early days the land was owned by Earl Godwin, father of King Harold. After the Norman Conquest the land was given to Roger de Mongomery and it later passed to the Earls of Arundel, who in later centuries were created the dukes of Norfolk. During the Elisabethan era the 4th Duke was excecuted for treasonable acts, all his land was forfeited and West Dean manor came into the ownership of Richard Lewknor (1542-1616). Sir Richard was a politician and lawyer – educated at Middle Temple. He was MP and Recorder for Chichester during the 1580s and 90s. He also became Judge on the Chester Circuit which was a really prestigious position. After his death, it was his grandson who took ownership as Richard’s son had predeceased him. However, this memorial is a fitting memory to all three of them.

Unfortunately, a terrible fire in 1934 destroyed the lower portion of the memorial and the effigy of Sir Richard was destroyed.  Early descriptions described him as wearing a square cap, ruff and rich gown with his feet resting on a greyhound – the emblem of fidelity. Luckily son and grandson kneeling on cushions and apparently at prayer remain virtually unscathed, though of course the bright paintwork has long since faded to bear stone. On the left we see the son, bareheaded and with a full beard wearing the traditional greaves – boots which protect the shins from attack – together with tasset armour – this protects the thigh area. The grandson, on the right has a shorter beard and wears jackboots.

A lot of history happened between 1588 and 1635 didn’t it! Wouldn’t it be fun to be able to see these three men at West Dean. How much did the changes in the monarchy filter down to them here in Chichester District. They were prominent men in society, all three having been politicians and educated in London. What changes would they have seen after the death of Queen Elisabeth and the accession of a Scottish king, James I? Was the grandson a supporter of King Charles I? Of course he had died long before the Civil War, but I wonder whether the later members were Royalists?