Before Christmas I finally got round to watching the film Bright Star, Jane Campion’s film about the quiet love affair between John Keats and Fanny Brawne. I thought I might find it a bit sickly, but on the contrary I loved it and it will stay with me for a long time. Most striking was the portrayal of Fanny who I found simpy divine! Maybe it was over-emphasised, but her fiery temperament and fascination with fashionable style, creating her own outfits from material scraps and ribbons, really brought the film to life.

They met in Hampstead in 1818; Fanny and her mother and younger brother and sister rented one half of a property belonging to Charles and Maria Dilke whilst John Keats moved in with his friend Charles Brown who owned the other half. By the end of the year it was clear that the two were in love, but John mourning the loss of his younger brother Tom, was also beginning to fail in health. His friends encouraged him to take a holiday to help him recover his spirits. 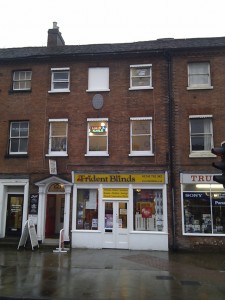 The house where Keats stayed in Eastgate Square Chichester

He travelled to Chichester, probably arriving on St Agnes’ Day, 20th January 1819 to stay with the parents of his new friend Charles Dilke.  A blue plaque commemorates the house on Eastgate Square where he stayed – well it’s not a real ‘blue plaque’ more like a large grey slate one!. The property was built in 1780 by Thomas Andrews, a local builder associated with the New Assembly Rooms and the Theatre.

While staying in Chichester, Keats began to write ‘The Eve of St Agnes’, a poem which tells the story of young lovers driven apart by feuding families. True to the legend Madeline, Keats’ young innocent heroine goes to bed on the Eve of St Agnes silent and supperless, keeping her eyes upon Heaven, hoping to dream of her future husband. It seems likely that the medieval architecture of Chichester inspired Keats to write of a great hall and house where Madeline lived! In a letter Keats wrote to his brother George, he describes invitations to card parties with ‘old dowagers’ in the City. One of these parties was probably thrown by a Mrs Mary Lacy who lived in an ancient building that was once the City Guildhall dating as far back  as the 12th Century. In 1394 Richard II had granted it to Bishop Mitford for use as the Vicars Hall for dining and recreation. We know that Mrs Lacy’s rooms overlooking South Street at the east end of the Vicars Hall, were directly above the huge vaulted cellar, now known as the Crypt. Since 1661 the landlord of the The White Horse Inn opposite, on the east side of South Street had leased the vaults to store his wine and there were reports that in 1686 one of the vicars complained that pigs were being kept there too!

As can be seen in the photo the ribs of the Crypt form magnificent pointed arches supported on stout round columns. The  setting is perfect for Keats’ imagination!  Porphyra, Madeline’s courtly lover stands in the great hall ‘hid from the torch’s flame, Behind a broad hall-pillar’ …..’ He follow’d through a lowly arched way, Brushing the cobwebs with his lofty plume,’ …

Keats would have seen the ancient Vicar’s Hall , possibly met a porter guarding the gateway leading to the ecclesiastical quarter of the city and and watched the heavy doors being shut and bolted with chains and bolts at curfew every evening. He visited Chichester at the end of January when, just like today as I write this piece, the mist and greyness of the day fails to shake off the shadows of the night. All summed up in the second to last stanza of the poem where the lovers escape …..!

‘They glide, like phantoms, into the wide hall;
Like phantoms, to the iron porch, they glide;
Where lay the Porter, in uneasy sprawl,
With a huge empty flaggon by his side:
The wakeful bloodhound rose, and shook his hide,
But his sagacious eye an inmate owns:
By one, and one, the bolts full easy slide:
The chains lie silent on the footworn stones;
The key turns, and the door upon its hinges groans.’