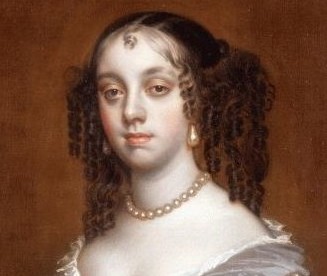 When I was working at Goodwood one afternoon this summer one of the visitors told me a few interesting facts about King Charles II’s consort – Queen Catherine of Braganza. It turned out that this chap is a volunteer researcher at Osterley Park and loves sharing his discoveries!

So he wanted me to know that this Portuguese princess who married King Charles II in 1662 was responsible for introducing four things that ultimately changed life forever in this country. All good things I should add….

Tea!
Tea was already common in Europe in the mid 17th century and Catherine’s preference for non alcoholic drinks meant that it became a socially acceptable amongst the aristocracy. It quickly became one of the court beverages and popular in literary circles.

“Home, and there find my wife making of tea”, Pepys recorded under 28 June 1667, “a drink which Mr. Pelling the Pottecary tells her is good for her colds and defluxions”.

Marmalade!
The first marmalade was made from quince in Portugal. The word for quince is marmelo! Queen Catherine found the way of life and, in particular the food in England not to her liking. It is known that the marmelo preserve was introduced to the Royal Court. Later, the preserve was made from the peel of oranges imported from China.

Mumbai!
As part of her dowry, King Charles II received the seven islands of Bombay. In 1668 Charles leased these islands to the East India Company for 20 years for an annual sum of £10! This acquisition strengthened its foothold in India and led to the formation of private armies to safeguard the incredible power of Britain in India.

Forks!!!
The Queen is credited with introducing the fork to the Royal Court in London. She was said to have been aghast to see that the aristocracy used just a knife and a spoon, enjoying nothing better than using fingers to eat with. The knife was used to cut meat in to manageable chunks whilst the spoon would be used for runny puddings or sauces.