Trees – the very essence of life in the South Downs 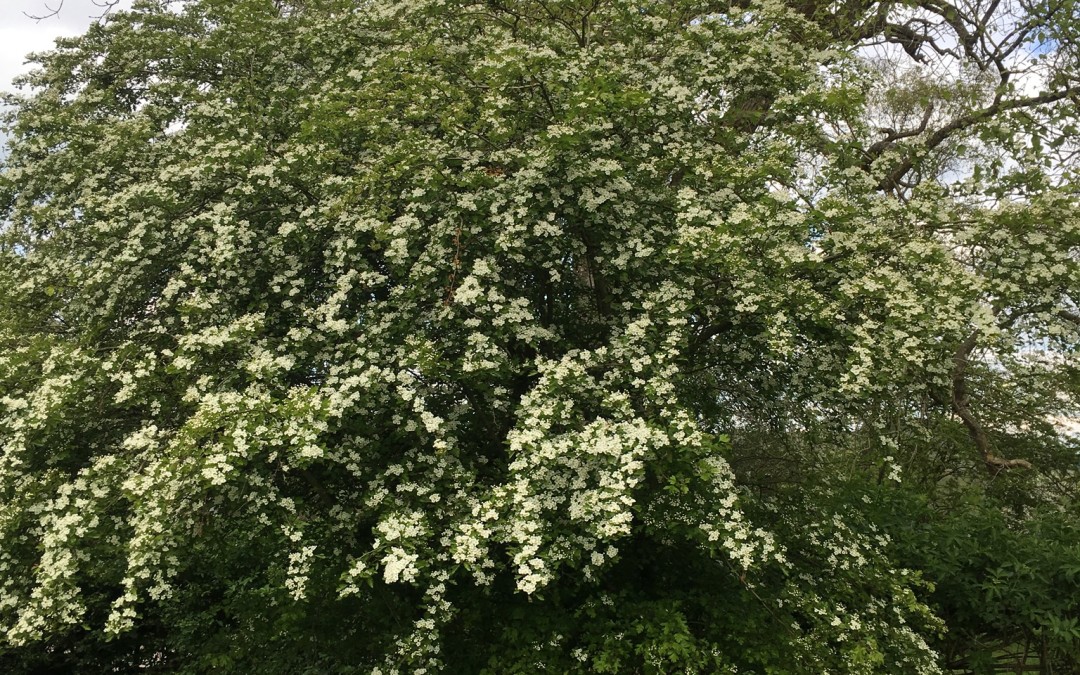 Last Christmas my daughter presented me with tickets to take “A Walk through the Woods”! And last weekend that is exactly what we did! Nor just any old walk in any old wood – rather a proper guided tour of the lesser known areas of the Weald and Downland Museum in Singleton near Chichester.

We had no idea at all what to expect or who would be guiding us. We had simply been told to wear sturdy shoes and be prepared to scramble around a bit. More than two hours of tree identification seemed rather like hard work, so the bit I fancied most was the prospect of tea and cake afterwards….

We were introduced to Jon, who has worked for the Museum for many years and clearly has a great passion for the social history of the South Downs. With a gentle and unassuming manner Jon introduced us to many local trees – by the end we felt that we really knew the nature of each individual one – not just how to identify them, but quirky anecdotes, how they got their names, snippets of history, how and why they were planted and their uses over the centuries.

Note…. I said planted didn’t I! We tend to assume that so many trees we see on the South Downs are as nature intended – not a bit of it. What we see today is how man has shaped the area – first of all to eke out a subsistence in the very early Middle Ages. Then by establishing woodlands to service the needs of a growing and modernising population – these are just a few of the examples that Jon told us – wheels made of ash, bowls and butter churns of sycamore, hornbeam used by butchers for chopping blocks and firewood as it burns so easily. Plus of course loads more facts that already I cannot remember!

The first part of the tour took us up the far inside of the museum grounds which border on to West Dean College and Gardens. Of course, all of it in the past belonged to the West Dean Estate and in the 1840s the part we walked in was converted to be a plantation of trees. These trees would have been planted for their timber. We learnt the distinction between timber and wood. I do not recall the required girth of a tree at which point it turns from wood to timber, but what was interesting to learn, was that local peasants were by tradition allowed to forage for wood but never timber, presumably because of loss of commercial value. So of course what the locals did, was shimmy up the large trees and lop off branches which were still ‘wood’!  From our vista high above the main buildings of the museum Jon pointed out magnificent trees down in the valley – these would have been especially planted as estate specimen trees to admire.

Jon then took us on to see the work he and his team have been carrying out over the winter – the coppicing of hazel trees. Hazel is a very versatile wood – the small branches are traditionally used for fencing and hurdle making, the very small twigs burn fiercely creating high temperatures for both lime and charcoal burners and the larger logs are perfect to burn in inglenook replaces from the Middle Ages onwards. So coppicing was a really important commercial business until fairly recently. This is also carried out on the Goodwood Estate and although I haven’t seen him recently, there used to be a man who made walking sticks who was allowed to go into the Valdoe to cut down hazel and sweet chestnuts to fashion into shepherd crooks and round-topped sticks. 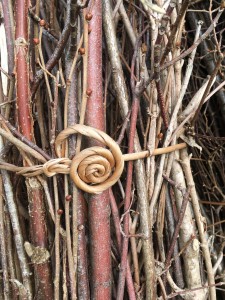 Bundling the coppiced twigs together at the Weald and Downland 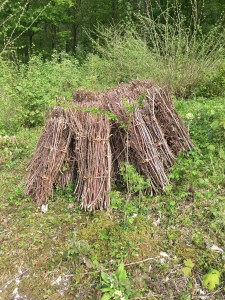 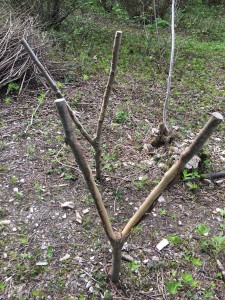 Ancient methods of using staves to bundle twigs for firewood

The final part of the afternoon was spent identifying commonplace trees and those also used for hedging – perfect for the wildlife of the area. I had no idea that the goat willow was the same tree as the pussy willow – it got its name – goat willow – because when it was first photographed for identification purposes there was a goat standing beside the tree! The name pussy willow is far nicer – reminding us that the blossom resembles cat paws.

There are lots of horse chestnuts dotted all round the museum grounds, historically this tree is of very little value and not worth growing commercially. Apparently the wood is very pulpy, hence difficult to fashion into furniture or vessels, nor does it burn well.

All in all a wonderful way to spend an afternoon – great guide, beautiful countryside and scummy ginger cake! Roll on next week when we return to sample the Dawn Chorus – the only slight downside is that we have to be there at 4.30am!!