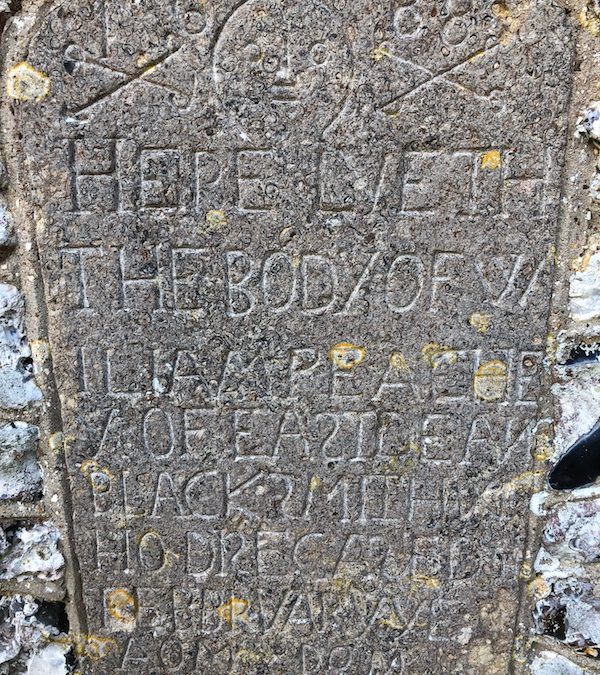 The ancient gravestone of William Peachey is set into the wall of All Saints Church in the downland village of East Dean. It has become quite famous, people come from far and wide to look at this 17th century stonemason’s workmanship, or more correctly his lack of ….  But few people know that William Peachey had been a pretty important figure during the English Civil War. He was a highly skilled blacksmith who undertook to make the swords for each member of a fierce Parliamentarian fighting unit called the Hambledon Boys –  he personalised each one with the family arms upon the hilt, using brass or silver and enamel. It is said that he also wrote the family motto upon each sword.

Unfortunately as you can see, the stonemason’s skill did not quite live up to the skill of Peachey himself. Peachey must have been considered important enough to have a gravestone – very few tradespeople would.

The skull and crossbones at the top gravestones are there to warn everyone of what will happen when they die – in other words – live your life well ‘cos this is what will happen to you too! But look at these ones….the chubby faced skull looks pretty friendly and the bones look like knobbly sticks!

Well the mason can be forgiven for his spelling, after all it was the 17th century, but he clearly had no concept of layout. It is the last line however, that is the most amusing, as the mason must have been well aware that something important had to be inscribed at the bottom, but had no idea what those words should be – so he put AOM DOM as his version of Anno Domini – in the year of our Lord. But by then he didn’t have enough space to include the date – so squeezed it in at the top of the stone instead! But maybe he didn’t even know that they were supposed to go together.