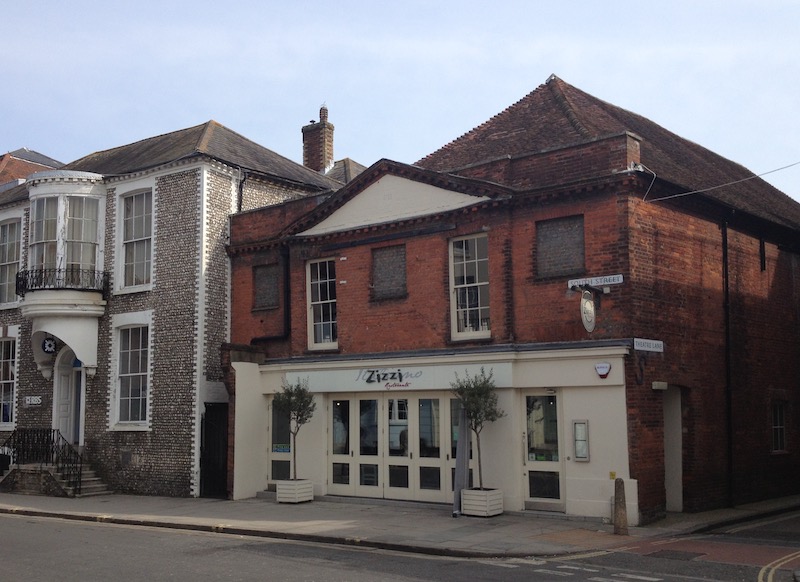 If you’ve ever been into Zizzi’s at the bottom of Chichester’s South Street you may have wondered, whilst waiting for your pizza or pasta to arrive, what the building used to be…. The clue is in the name of the little street beside it!! Above the modern restaurant entrance you can see the remains of an 18th century red brick frontage complete with a brick dentil course, painted pediment and parapet – all classic signs of Georgian architecture. But the building is much older – originally a malthouse and granary. In 1764, with money granted by the 3rd Duke of Richmond, it was adapted for use as a theatre. The theatre was upgraded and enhanced at the end of the 18th century when it acquired all the stage props and scenery which had been created for the Duke of Richmond’s theatre in his London home. Sadly that house, on the banks of the River Thames near Whitehall burned down in 1791, but luckily many of the fixtures and fittings could be rescued and were brought down to Goodwood. So by the early 19th century it was the place to be seen, with the ladies turning up in ballgowns and the men in their finery crowding into the galleried auditorium – now the dining area – to watch actors perform on a stage where the pizza oven now stands!!!

The theatre underwent major renovation and upgrading in the 1820s but only lasted another thirty years when it was sold for £335 to be converted into a brewery.